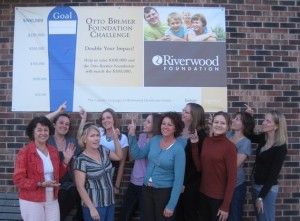 There’s just $11,945 left to raise for Riverwood Foundation to secure a $300,000 challenge grant from the Otto Bremer Foundation.

In 2011, Riverwood Foundation set out to raise $2.2 million through its Better Together Capital Campaign to support Riverwood Healthcare Center’s $21 million expansion project that offers greater privacy and safety for patients and their families. To support the project, the Otto Bremer Foundation put forth a challenge to the community in the form of a generous $300,000 matching grant, of which Riverwood Foundation has raised $288,555.

Riverwood Foundation Interim Director Jodie Johnson says: “We are thrilled with the level of support we’ve received so far from our volunteers and donors. We are hopeful that folks who have not yet made a contribution to the campaign will now rise to the challenge. Time is running short to get your gift doubled with a dollar-for-dollar match by the Otto Bremer Foundation as we expect that we’ll reach the $300,000 goal before the end of June.”

Planning is already underway for the Foundation’s premier annual fundraising event and is being organized by a dedicated group of volunteer committee members.

This year’s gala is set for October 13th at the 40 Club Convention Center. Proceeds from the 2012 black-tie affair will support Riverwood’s hospital expansion project. In 2011, more than $57,000 was raised toward the Better Together campaign.

Johnson says: “We are looking forward to another spectacular evening to raise funds to serve the healthcare needs of area residents at Riverwood Healthcare Center.”

For more information about the expansion project and to make a tax-deductible gift, visit www.riverwoodhealthcare.com/bettertogether or call the Foundation office at (218) 927-5554.