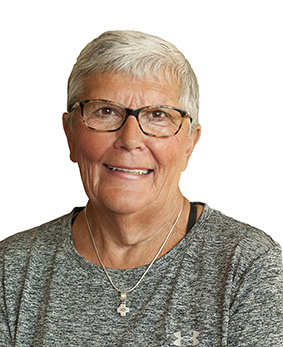 
Judy Nelson, age 68, used to wake up coughing with acid in her throat. She struggled with symptoms of gastro-esophageal disease (GERD) for more than 35 years.

“The last few years, GERD really affected my lifestyle,” Judy explained. “I felt kind of choked when I laid down, so sleeping was difficult. I couldn’t eat out late and coffee and wine triggered my reflux symptoms.

She added: “I tried taking an acid-blocking medication for awhile, but I dislike taking medications and started having some side effect symptoms. My dad died of esophageal cancer and my brother has Barrett’s esophagus, so I’ve been worried about the increased cancer risk for me.”

Her brother’s inquiry on whether she had gone in for an EGD exam prompted her to seek care for GERD at the Minnesota Reflux and Heartburn Center (MRHC) at Riverwood Healthcare Center in Aitkin.

After comprehensive evaluation and testing, the MRHC reflux specialist diagnosed Barrett’s esophagus and advised that the LINX procedure was the best course of treatment for Judy. The LINX System is a small flexible bracelet of interlinked titanium beads with magnetic cores. It is implanted with a minimally invasive, outpatient procedure around the weak lower esophageal sphincter (LES). The magnetic attraction between the beads helps the LES resist opening to gastric pressures, preventing reflux from the stomach into the esophagus. Swallowing food temporarily opens the magnetic bond, allowing food and liquid to pass normally into the stomach.

“I’m delighted with the success of my treatment,” Judy said. “After my procedure three months ago, I haven’t had any acid reflux and I’m not taking any medication. I can drink coffee again. I feel awesome.”