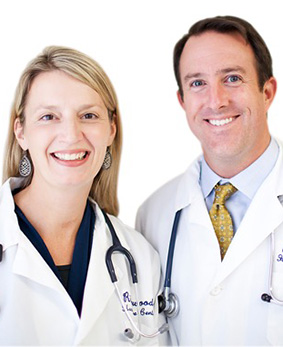 
As we age, the nerves and muscles that control the bladder may not work as well as we want, causing leakage.

In some patients, bladder control problems are caused by miscommunication between nerves. More specifically, the brain and sacral nerves, which control the bladder, do not communicate properly, causing the nerves to tell the bladder when to release urine at the wrong time. Pregnancy and childbirth, obesity, weak pelvic muscles, diabetes, bladder cancer or stones and neurological disorders can contribute to overactive bladder.

Fortunately, there is a proven treatment option for women who have not had success with other overactive bladder treatment options, such as medications and behavioral therapy.

Drs. Michael and Rachel Cady, obstetrics and gynecology specialists with the Minnesota Center for Obstetrics & Gynecology, are among only a few surgeons locally offering a new high-tech solution to help women regain bladder control. They can implant a nerve-stimulating device called InterStim, which stimulates and quiets the nerves of the bladder.

The InterStim procedure has several benefits, including freedom from the embarrassment of leaks. It may also help reduce the need to interrupt sleep due to waking many times during the night to urinate.

“Patients who have had this procedure have used the term life-changing,” Dr. Michael Cady says. “It allows them to need a toilet less often, have less urgency, and more control of their bladder.”

One 42-year-old patient who recently received the implant at Riverwood Healthcare Center with Dr. Michael Cady has been “thrilled” with the improvement she’s experienced.

“I was having to urinate every 15 to 20 minutes,” says Paula Mitchell. “Sharing one bathroom with my husband and two girls was very difficult as I could not hold it. After I had the InterStim implant, I’m so relieved to have control over my bladder again and I would recommend this procedure to anyone. Dr. Cady explained everything so well and the support from the nursing staff at Riverwood and the device company was great. ”

Dr. Michael Cady adds: “Other patients have told me that the procedure has ‘given them back their lives.’ They can once again go places and do things they’ve not been able to do for some time while no longer constantly searching for the nearest bathroom. Some are now pad-free for the first time in years.”

Anyone who has a urinary problem should address the issue as soon as possible, according to Drs. Michael and Rachel Cady. There is very effective treatment for people with overactive bladder leakage (also known as urge incontinence) and for whom medications have failed to help.

For a consultation on overactive bladder treatment, call Riverwood’s Specialty Clinic at (218) 927-5566.