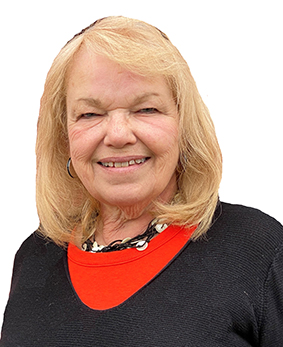 
At age 65, Dora Potts of McGregor started having vision problems from a combination of health factors.  From regular eye exams in the past several years with Dr. Steven Kinzer, optometrist at Eyecare Center of McGregor, she knew she had cataracts in both eyes that would need surgery at some point. However, spiking blood sugar and a diabetes diagnosis complicated matters.

“In June 2020, I was diagnosed with type 2 diabetes with sudden extremely high blood sugar and multiple physical symptoms,” Dora explains. “I had been pre-diabetic for years, but a couple of months of ‘pandemic eating’ pushed my body over the edge. That led to some mostly temporary, but serious, vision issues.”

Dr. Kinzer set up multiple appointments to monitor Dora’s vision progress as she got her blood sugar under control.  He advised her to wait until her vision was more stable before pursuing eye surgery.

Dora adds: “My vision was so distorted in the weeks immediately following my diabetes diagnosis that I would have probably jumped at any quick fix at that point. But Dr. Kinzer worked with me toward the best medical solution, while always leaving my options open.

“I work online full time and sometime in February 2021, I suddenly realized that it appeared I was trying to look ‘around’ a ‘great gray blob’ in one eye. I also realized that I had been straining constantly to see during online work and experienced frequent headaches during the workday.”

After Dora failed her eye test (without corrective lenses) for her driver’s license, she called Dr. Kinzer to ask for a cataract surgery consultation. Dora was referred to Dr. Joseph Merck, ophthalmologist with Great River Eye Clinic who performs surgery at Riverwood Healthcare Center. Dr. Merck did cataract removal and eye lens replacement for both Dora’s eyes at Riverwood in March 2021.

“Dr. Merck was enormously kind and informative during every phase of my treatment,” Dora says. “He explained it all thoroughly and even provided a video for me to watch in the office before I made any decision about upcoming procedures. He gave me all the knowledge required to make an informed decision to proceed with surgery and which type of lens to choose.”

“The eye surgery opened up my visual world! It has been life-changing!  I hadn’t realized how poorly I was actually seeing until I had the new lenses.

“Not only was my vision clearer, but I realized that, with the cataracts, I had been seeing everything shaded in a pale yellow. After the surgery, I could actually SEE that white was WHITE!  Within two weeks after surgery, my distance vision returned to 20/20 in each eye. I now only require glasses for reading, computer work and close-up tasks. I can drive without corrective lenses. The really cool thing is that, even without my glasses, I can actually read very well!”

Dora appreciates the outstanding care not only from Dr. Kinzer and Dr. Merck but also from the Riverwood staff.  From compassionate medical professionals and highly skilled medical/surgical teams to a nursing staff who was also very welcoming and attentive to patient needs, she has been very impressed with the care she has received not only for eye care but for other minor medical procedures as well.

She adds: “I could not have received more attentive and compassionate care anywhere! I have had experiences at other hospitals in the region, and the care at Riverwood is every bit as professional and competent. To have this quality of care locally is amazing and so reassuring!”