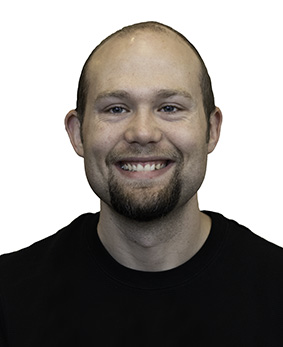 
A family history of gastroesophageal reflux disease (GERD) had Terry Lenzen, age 32, thinking he would suffer with the disease for many years as well. His sister was treated surgically for GERD when she was 18, and he started suffering GERD symptoms in his early teens.

To control his heartburn and reflux, Terry first started taking an over-the-counter drug and then progressed to taking a prescription antacid medication.

“I had digestive problems and reflux issues for many years. But I didn’t realize how severe my GERD was until my dentist pointed out that the acid reflux was so bad that it was causing harm to my teeth. While I slept, stomach acid was flowing into my mouth and eroding my back teeth.”

Soon after, Terry met with Dawn Harcey, nurse coordinator for the Minnesota Reflux and Heartburn Center at Riverwood Healthcare Center in Aitkin, to get set up for evaluation and testing of GERD.

“Within the first few hours of my Bravo monitoring test, it was evident that I had very advanced reflux disease,” Terry said. “After a manometry test showed my esophagus was working OK, I was cleared for treatment.”

A MRHC reflux specialist recommended either a Nissen or LINX procedure, two advanced solutions for GERD that would provide permanent relief from heartburn and reflux. Terry chose to undergo the LINX procedure, which was performed at Riverwood in June 2017.

The LINX System is a small flexible bracelet of interlinked titanium beads with magnetic cores. It is implanted with a minimally invasive, outpatient procedure around the weak lower esophageal sphincter (LES). The magnetic attraction between the beads helps the LES resist opening to gastric pressures, preventing reflux from the stomach into the esophagus. Swallowing food temporarily opens the magnetic bond, allowing food and liquid to pass normally into the stomach.