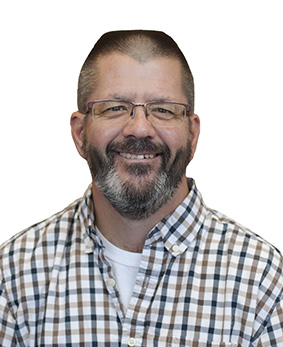 
A year ago Dan Borseth, who runs the Pine Insurance Agency in Aitkin, thought his heart health was fine. In January 2017, he was preparing for left hip replacement surgery. A day after his pre-op exam for hip surgery, he suffered a major heart attack.

“As I was heading to work, I started having pain in both hands, arms and chest and I broke out in a sweat,” Dan explains. “My wife, Beth, who was suffering from severe knee pain due to a torn muscle, recognized the signs for a heart attack and asked my secretary to drive me to the hospital in Aitkin. I walked into the Riverwood ER, but I left via chopper.”

Dr. Jeff Ehnstrom, the emergency care physician who examined Dan, comments:  “Dan had a cholesterol plaque in his heart that ruptured, causing a blood clot to form that fully blocked his heart’s main artery. The plaque had been there for an undetermined amount of time just waiting to rupture. He may have had some symptoms related to exercise tolerance, but he was not aware of it prior to the heart attack.”

“Our protocol (called a Level 1 or STEMI) in patients who suffer a heart attack like Dan’s is to give the patient a number of medications to help open up the artery.  One of those medications is a medicine that breaks down blood clots with the goal of restoring blood flow to the heart. We do this because of the time it takes to get a patient to a cath lab to definitively open the artery by placing a stent in the blockage.”

Dan was airlifted to Abbott Northwestern Hospital in Minneapolis where a stent was inserted in a main artery of his heart. He received follow-up cardiology care at Riverwood with Dr. Tim Dirks, cardiologist, and Rebecca Heimark, physician assistant, both with Minneapolis Heart Institute.

“I learned that my cholesterol was sky-high. After completing 22 sessions of cardiac rehab at the hospital, I started working out daily at home—lifting weights and using a treadmill and elliptical,” Dan explains. “I lost about 50 pounds in six months by changing my diet as well as exercising.”

Dr. Dirks comments: “Recognizing potential symptoms of a heart attack and then getting prompt medical attention can be critical to a successful outcome. Many times people do not know they are at risk until an event happens. Once an acute event occurs there are many things that can be done to prevent another occurrence. Some of these include completing cardiac rehabilitation and making lifestyle changes. Dan is certainly an inspiration on the power of what an individual can accomplish.”

About eight months after his heart attack, Dan was able to have his left hip replacement and is walking pain-free again.

“I received great care at Riverwood before and after my heart attack,” Dan adds. “My blood pressure is way down and I was able to get off one medication. I’m working fewer hours and feeling great. I feel so blessed to have highly skilled healthcare professionals who truly care so close to home.”