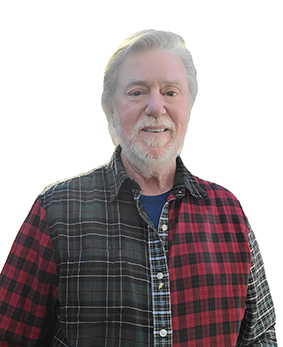 
A year ago, Bill Watson of the McGregor area was diagnosed with Type 2 diabetes. He learned of his diagnosis from a routine blood test for his annual physical exam at Riverwood Healthcare Center.

“The day I found out I was diabetic, I made up my mind to fix it,” Bill said.  “I figured if I didn’t do everything I possibly could, I would never know if I could control the outcome myself. Dr. Joselito Burgos was very willing to spend the time to have an in-depth discussion on what I needed to do to reverse my numbers, including taking a standard daily medication.”

“The biggest help I received from Maureen was encouragement in the knowledge that actions that I could initiate myself would likely result in an improvement—if not a reversal—in my blood numbers such as triglycerides, glucose and A1C.”

Bill agreed to wear the professional continuous glucose monitor, which showed his levels to be quite high.  Subsequent monitoring three months later revealed that his levels were dropping.

“In fact, the numbers were so much lower during the overnight hours, when I would not normally be testing my blood, that it resulted in reducing my medication by half of the original amount,” Bill said. “After eight months, my triglycerides dropped from 387 to 78, glucose dropped from 439 to 124, and A1C dropped from 12.1 to 5.4.”

Bill credits his outstanding success in managing his diabetes to significant lifestyle changes he enthusiastically embraced.

Bill explained: “I replaced foods that were harming me with foods that would heal me. It was important for me to substitute good food I loved instead of just trying to cut out the bad food I loved. For example, I substituted spaghetti noodles with spaghetti squash. What went away was alcohol, sugary juices and pop, white bread and pasta, and sugar-added foods as much as possible. I also began walking 4 to 5 miles a day, with a goal of 1,500 miles a year, and used a stationary bike more often.”

Bill compliments not only the initial care recommendations and guidance he received at Riverwood, but also the subsequent follow-up appointments and monitoring that provided information on his progress, which motivated him to maintain his lifestyle improvements.

Bill added: “My diabetes diagnosis was the best thing that could have happened to me!  A 35-pound weight loss has left me feeling better than I have in 20 years! My remarkable results are a tribute to the care I have received at Riverwood. The encouragement from Dr. Burgos and Maureen was way beyond my expectations!”

Bill offers this advice to diabetes patients: “Engage your doctors and nurses with questions and discussions about your health, as they are very willing to spend time with you. Ultimately, your diabetes diagnosis is yours to control. You are worth it.

“I decided to do everything I could think of to control my diabetes, and then stuck with it. My numbers are now basically non-diabetic numbers. This happened in a matter of months and has continued for more than a year now.”