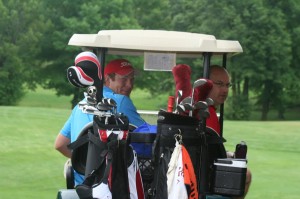 Supporters from across the state participated in the Holes fore Hospice event sponsored by Riverwood Foundation at Ruttger’s Bay Lake Lodge on July 14. Area golfers and diners came together for a day of leisurely sport, dining, silent-auction bidding and camaraderie, which brought in over $21,000 for local hospice care.

Hospice Committee members and over 40 volunteers worked together to make the event a success. Kim Jones, event planner, offered these comments: “It was so fun to see so many people open their hearts for hospice.  The rain forecast didn’t keep anyone from coming out to have some fun and play for a great cause.  The outdoor BBQ with live music, raffles, auction items, and great food was a relaxing way to end the day!”

Emily Thiel gave a heart-warming speech to the crowd about their son Henryk who used hospice care at a very young age.  With their son dying at just 5 months old, the Thiel family was able to enjoy the short time they had with him because of the help they received through a hospice program.

Foundation Director Jodie Johnson emceed the event with Bob Janzen as the live auctioneer, persuading attendees to engage in competitive bidding that raised nearly $3,000. A trip to Florida plus four passes to the Walt Disney Parks was won by Mark Meyer.

“Hospice care is so vital for terminally ill patients and their families,” says Katie Nelson, Foundation manager. “More than a million patients are served by hospice each year in the United States. Almost everyone knows someone who has benefited from hospice care. Sometimes it is a friend or family member or may, one day, even be you.”

Nelson adds: “Riverwood Foundation truly appreciates the support the community showed at this event and in past years. Mark your calendar for our next big fundraiser—the Riverwood Gala—on October 12th at the 40 Club Convention Center.

The Gala theme this year is “Together, we will harvest healthy communities” and will include entertainment by Joe Schmit. Visit www.riverwoodhealthcare.org to make a donation or learn how you can get involved with Riverwood Foundation.